With this Policy Report, the Centre for Research and Education in Public Health, Health Policy and Primary Health Care (CEHP) is inaugurating a chapter of activities promoting international collaborations in fields of common interest.

The recent and cynical use of the COVID-19 pandemic as a historically unprecedent profit making activity by the pharmaceutical industry is certainly reviling the dominance of the market values of the capitalist rule. This bland reality determined our decision to produce a report tackling this issue.

The author of this report Feride Aksu Tanık is a physician, specialized in public health. Worked in Ankara and Ege Universities as Professor of Public Health. She took part in establishment of Cancer Registry System in Turkey and community-based curriculum development in Ege University Faculty of Medicine.

She was elected as Secretary General of Turkish Medical Association in 2010-2012 and she is the head of Ethics Committee currently.  She is among the founding board members of Human Rights Foundation Turkey.  She is the President of International Association of Health Policy in Europe. She is signatory of “Peace Petition” and dismissed from Ege University with a Government Decree in 2017.

Her research and published work is focused to health policies, political economy of vaccines, right to health, public health services in disasters and human rights.

Vaccine Production before the Pandemic

High-cost and long-term basic scientific research lays the background for both the manufacturing of vaccines and pharmaceuticals. The research mainly proceeds along two axes. Along the first axis, there are public research institutes such as National Institute for Health in USA, Robert Koch Institute in Germany, Pasteur Institute in France etc.  Those Institutes were the basis of the basic scientific research for pharmaceuticals and vaccines and carried out taxpayer-funded basic scientific research primarily conducted at public research institutes in central capitalist states, at research and development centers of public universities[1]. Notable public investment is also at stake in these initiatives. For instance, US National Institutes of Health (NIH) played an active role in the development of Hemophilus influenza type b, hepatitis A, rotavirus, and HPV vaccines[2] . Universities and vaccine institutions in Canada were active in the research, development and assessment of acellular pertussis vaccine and vaccine adjuvants and the UK Health Protection Agency was effective in the accelerated development, licensing and administration of the meningococcal conjugate vaccine during the meningococcal epidemic[3].

The second axis, on the other hand, based on developing countries such as Cuba, Brazil, India, Vietnam, China, the satellites of Pasteur Institute in Tunisia, Iran. Some of them are doing both vaccine research and manufacturing, some of them are producing vaccines based on transferred technology.   India is a very striking example; in 1950’s  following the establishment of Hindustan Antibiotics[4], India developed an expertise in pharmaceutical manufacturing and the efficiency of its  industry fast established it as the prime source of generic medicines in the world[5].  India quickly became the "pharmacy of the developing world"[6]. Cuba is another striking example; doing vaccine researches both at the Finlay Institute and the Center for Genetic Engineering and Biotechnology, despite the embargo, the country is even transferring technology to Iran and Vietnam.[7],[8]

Following the establishment of the World Trade Organization (WTO) in 1995, many countries signed membership agreements as well as the Trade-Related Aspects of Intellectual Property Rights Agreement (TRIPS) that protected intellectual property rights[9]. Those countries were granted a ten-year transition period for their bodies that manufactured pharmaceuticals and vaccines to maintain their production exempt from product patent protection. This period ended in 2005 for most WTO member states. What this means is that now these countries will not be able to manufacture generic drugs and vaccines under patent protection. Patent rights not only granted manufacturers the monopoly to manufacture and sale of vaccines or drugs for 20 years by means of the TRIPS Agreement, but also authorized them to prevent others from producing, using, selling, marketing, and importing these products9.

The first global crisis within this scope broke out at the turn of the 21st century concerning antiretroviral drugs, as the impoverished peoples of the southern hemisphere could not access these drugs that were sold at very high prices due to patent protection. Brazil and South Africa have different experiences in terms of generic antiretrovirals production.

In 1997 South Africa passed the Medicines and Related Substances Act, which governed use of generic medicines in South Africa, and was designed to enhance access to generic medicines[11]. The law was challenged by the Pharmaceutical Manufacturers Association (PMA), which eventually dropped the case in 2001. Although HIV-AIDS activists expected the government to use the legislation to import and produce generic AIDS medicines, the South African government never did so, instead focusing on AIDS denialism11.

Nevertheless, the global campaign to access generic drugs both in countries like South Africa and Brazil with HIV-AIDS epidemic and in central capitalist countries, including the US, garnered tremendous attention[*] having been backed by Yale University professor Prusoff who found the active substance in antiretroviral drugs[12]. Big pharmaceutical companies backed down in order not to lose prestige and this backing down ended up in a process known as TRIPS “flexibilities” at a conference convened by the WTO in Qatar’s capital Doha13.

[*] Brian Tilley’s documentary It’s My Life (2001) provides a quite striking perspective on this struggle.

The TRIPS “flexibilities” were allowed on the condition that HIV/AIDS, tuberculosis, malaria and other epidemics represented a national emergency or catastrophe given that domestic laws permitted so13 Accordingly, use of generic drugs in a country, in other words allowing TRIPS flexibilities, can only be possible if the product is not under patent there, if the patent expired, if there are more than one licenses, and if there is no patent imposition in that country as per WTO rules! If the manufacturer has solely the right to domestic production, it is simply impossible for another country to purchase generic drugs/vaccine from it13.

TRIPS flexibilities also vary according to the economic conditions of countries. While it was possible to overcome the patent imposition until January 2016 in the least developed countries, as defined by the World Bank, generic products could be used by obtaining “compulsory licensing” or “government use licenses” in developing countries2. Parallel import, on the other hand, signifies the purchase of a drug at the cheapest price from a country market, export of a drug to a foreign country followed by its re-import to the country it would be used in2,. Such concepts as compulsory licensing, government use license, parallel import, and TRIPS flexibilities are practices that “force the tired uphill,” as it were.

read all the report in PDF 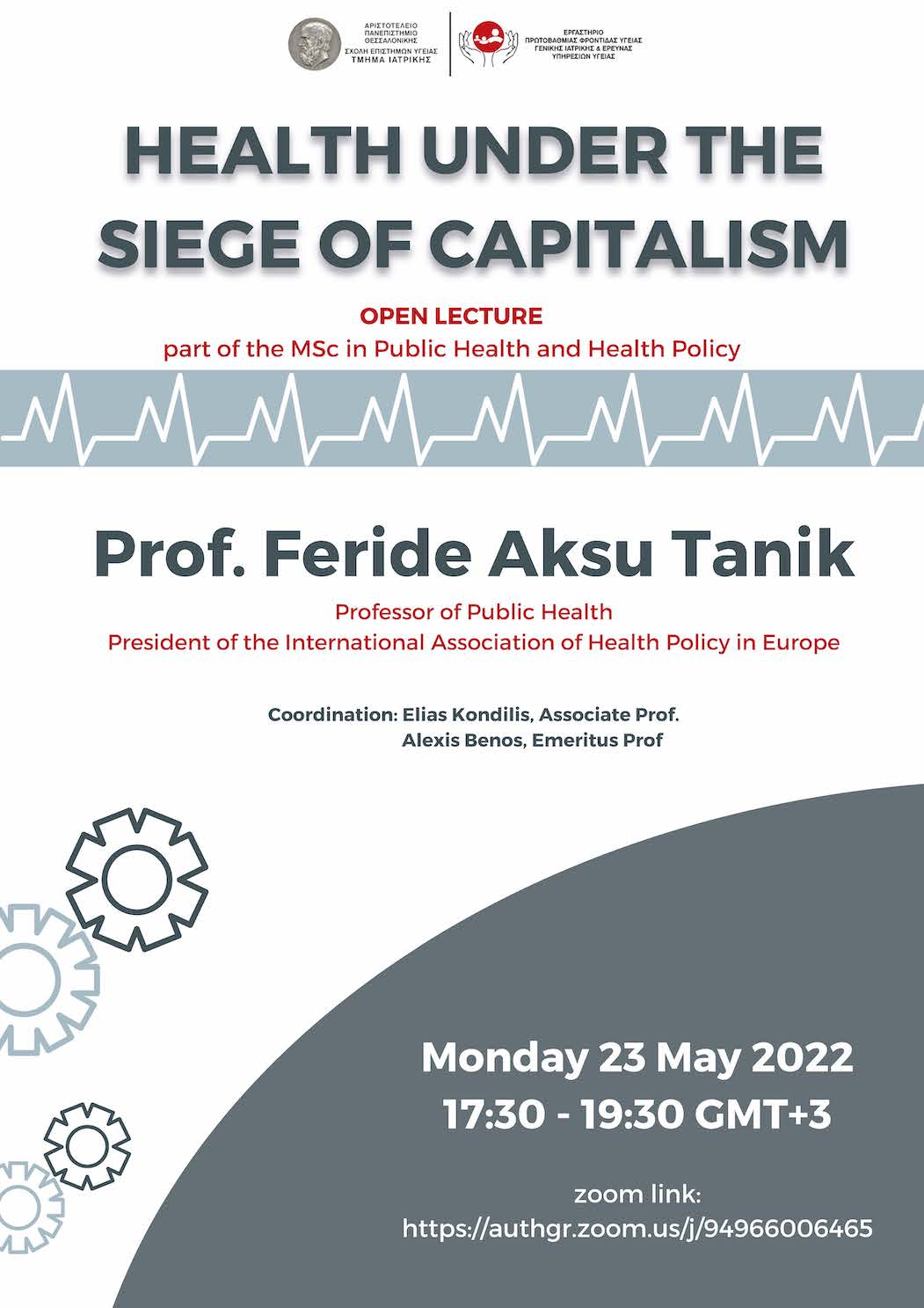 Open seminar: Health under the siege of capitalism

The management of the  COVID-19 epidemic crisis in refugies populations in Greece. Critical analysis

Critical assessment of the preparadeness and policies to deal with the pandemic of the new corona (SARS - CoV-2): international and Greek experience

© 2020 Centre for Research & Education in Public Health, Health Policy & Primary Health Care
For all enquiries please contact This email address is being protected from spambots. You need JavaScript enabled to view it.